After a perilous drive up a steep, narrow, winding road from Lake Geneva we arrived at an attractive Alpine village (Villars-sur-Ollon) to meet with fellow Perl Mongers in a small restaurant.  There followed much talk and a little clandestine drinking of exotic spirits including Swiss whisky. The following morning walking to the conference venue there was an amazing view of mountain ranges. On arrival I failed to operate the Nespresso machine which I later found was due to it simply being off.  Clearly software engineers should never try to use hardware. At least after an evening of drinking.

Wendy’s stall was piled high with swag including new Bailador (Perl 6 dancer like framework) stickers, a Shadowcat booklet about Perl 6 and the new O’Reilly “Thinking in Perl 6″. Unfortunately she had sold out of Moritz’s book “Perl 6 Fundamentals” (although there was a sample display copy present). Thankfully later that morning I discovered I had a £3 credit on Google Play Books so I bought the ebook on my phone.

The conference started early with Damian Conway’s Three Little Words.  These were “has”, “class” and “method” from Perl 6 which he liked so much that he had added them to Perl 5 with his “Dios” – “Declarative Inside-Out Syntax” module.  PPI wasn’t fast enough so he had to replace it with a 50,000 character regex PPR. Practical everyday modules mentioned included Regexp::Optimizer and Test::Expr. If the video  doesn’t appear shortly on youtube a version of his talk dating from a few weeks earlier is available at https://www.youtube.com/watch?v=ob6YHpcXmTg

Jonathan Worthington returned with his Perl 6 talk on “How does deoptimization help us go faster?” giving us insight into why Perl 6 was slow at the Virtual Machine level (specifically MoarVM). Even apparently simple and fast operations like indexing an array were slow due to powerful abstractions, late binding and many levels of Multiple Dispatch. In short the flexibility and power of such an extensible language also led to slowness due to the complexity of code paths. The AST optimizer helped with this at compile time but itself took time and it could be better to do this at a later compile time (like Just In Time).  Even with a simple program reading lines from a file it was very hard to determine statically what types were used (even with type annotations) and whether it was worth optimizing (since the file could be very short).

The solution to these dynamic problems was also dynamic but to see what was happening needed cheap logging of execution which was passed to another thread.  This logging is made visible by setting the environment variable MVM_SPESH_LOG to a filename. Better tooling for this log would be a good project for someone.

For execution planning we look for hot (frequently called) code, long blocks of bytecode (slow to run) and consider how many types are used (avoiding “megamorphic” cases with many types which needs many versions of code).  Also analysis of the code flow between different code blocks and SSA.  Mixins made the optimization particularly problematic.

MoarVM’s Spesh did statistical analysis of the code in order to rewrite it in faster, simpler ways. Guards (cheap check for things like types) were placed to catch cases where it got it wrong and if these were triggered (infrequently) it would deoptimize as well, hence the counterintuitive title since “Deoptimization enables speculation” The slides are at http://jnthn.net/papers/2017-spw-deopt.pdf with the video at https://www.youtube.com/watch?v=3umNn1KnlCY The older and more dull witted of us (including myself) might find the latter part of the video more comprehensible at 0.75 Youtube speed.

After a superb multi-course lunch (the food was probably the best I’d had at any Perl event) we returned promptly to hear Damian talk of “Everyday Perl 6”. He pointed out that it wasn’t necessary to code golf obfuscated extremes of Perl 6 and that the average Perl 5 programmer would see many things simpler in Perl 6.  Also a rewrite from 5 to 6 might see something like 25% fewer lines of code since 6 was more expressive in syntax (as well as more consistent) although performance problems remained (and solutions in progress as the previous talk had reminded us).

Next Liz talked of a “gross” (in the numerical sense of 12 x 12 rather than the American teen sense) of Perl 6 Weeklies as she took us down memory lane to 2014 (just about when MoarVM was launched and when unicode support was poor!)  with some selected highlights and memories of Perl 6 developers of the past (and hopefully future again!). Her talk was recorded at https://www.youtube.com/watch?v=418QCTXmvDU

Cal then spoke of Perl 6 maths which he thought was good with its Rats and FatRats but not quite good enough and his ideas of fixing it.  On the following day he showed us he had started some TDD work on TrimRats. He also told us that Newton’s Method wasn’t very good but generated a pretty fractal. See https://www.youtube.com/watch?v=3na_Cx-anvw

Lee spoke about how to detect Perl 5 memory leaks with various CPAN modules and his examples are at https://github.com/leejo/Perl_memory_talk

The day finished with Lightning Talks and a barbecue at givengain — a main sponsor.

On the second day I noticed the robotic St Bernards dog in a tourist shop window had come to life.

Damian kicked off the talks with my favourite of his talks,  “Standing on the Shoulders of Giants”, starting with the Countess of Lovelace and her Bernoulli number program. This generated a strange sequence with many zeros. The Perl 6 version since it used rational numbers not floating point got the zeros right whereas the Perl 5 version initially suffered from floating point rounding errors (which are fixable).

Among other things he showed us how to define a new infix operator in Perl 6. He also showed us a Perl 6 sort program that looked exactly like LISP even down to the Lots of Irritating Superfluous Parentheses. I think this was quicksort (he certainly showed us a picture of Sir Tony Hoare at some point). Also a very functional (Haskell-like) equivalent  with heavy use of P6 Multiple Dispatch.  Also included was demonstration of P6 “before” as a sort of typeless/multi-type comparison infix. Damian then returned to his old favourite of Quantum Computing.

My mind and notes got a bit jumbled at this point but I particularly liked the slide that explained how factorisation could work by observing the product of possible inputs since this led to a collapse that revealed the factors.  To do this on RSA etc., of course, needs real hardware support which probably only the NSA and friends have (?). Damian’s code examples are at http://www.bit.do/Perl6SOG with  an earlier version of his talk at https://www.youtube.com/watch?v=Nq2HkAYbG5o Around this point there was a road race of classic cars going on outside up the main road into the village and there were car noises in the background that strangely were more relaxing than annoying. 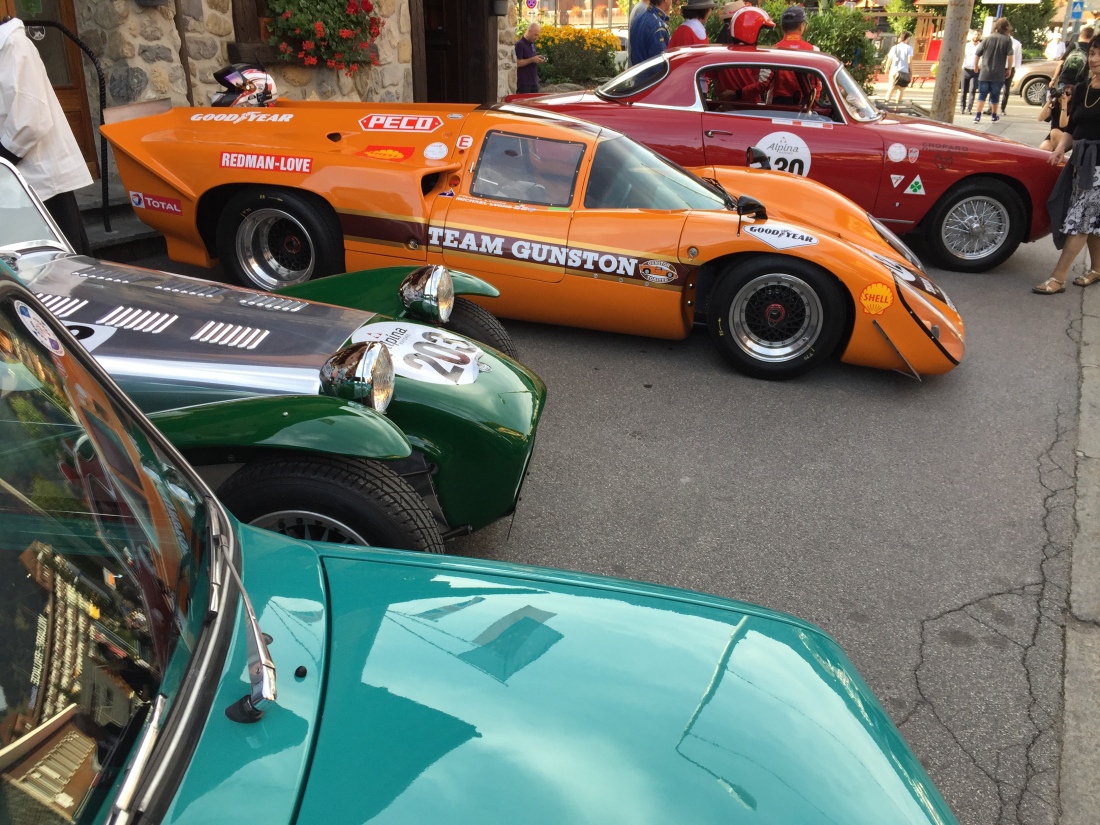 After Quantum Chaos Paul Johnson brought us all back down to ground with an excellent practical talk on modernising legacy Perl 5 applications based on his war stories. Hell, of course, is “Other People’s Code”, often dating from Perl’s early days and lacking documentation and sound engineering.

Often the original developers had long since departed or, in the worse cases, were still there.  Adding tests and logging (with stack traces) were particularly useful. As was moving to git (although its steep learning curve meant mentoring was needed) and handling CPAN module versioning with pinto.  Many talks had spoken of the Perl 6 future whereas this spoke of the Perl 5 past and present and the work many of us suffer to pay the bills. It’s at https://www.youtube.com/watch?v=4G5EaUNOhR0

Jonathan then spoke of reactive distributed software.  A distributed system is an async one where “Is it working?” means “some of it is working but we don’t know which bits”.  Good OO design is “tell don’t ask” — you tell remote service to do something for you and not parse the response and do it yourself thus breaking encapsulation.  This is particularly important in building well designed distributed systems since otherwise the systems are less responsive and reliable.  Reactive (async) works better for distributed software than interactive (blocking or sync).

We saw a table that used a Perl 6 promise for one value and a supply for many values for reactive (async) code and the equivalent (one value) and a Perl 6 Seq for interactive code. A Supply could be used for pub/sub and the Observer Pattern. A Supply could either be live (like broadcast TV) or, for most Perl 6 supplies, on-demand (like Netflix). Then samples of networking (socket) based code were discussed including a web client, web server and SSH::LibSSH (async client bindings often very useful in practical applications like port forwarding)

Much of the socket code had a pattern of “react { whenever {” blocks with “whenever” as a sort of async loop.He then moved on from sockets to services (using a Supply pipeline) and amazed us by announcing the release of “cro”, a microservices library that even supports HTTP/2 and Websockets, at http://mi.cro.services/.  This is installable using Perl 6 by “zef install –/test cro”.

Next Lee showed Burp Scanner which is payware but probably the best web vulnerabilities scanner. I wondered if anyone had dare run it on ACT or the hotel’s captive portal.

Wendy did some cheerleading in her “Changing Image of Perl”.  An earlier version is at https://www.youtube.com/watch?v=Jl6iJIH7HdA

Sue’s talk was “Spiders, Gophers, Butterflies” although the latter were mostly noticeably absent. She promises me that a successor version of the talk will use them more extensively. Certainly any Perl 6 web spidering code is likely to fit better on one slide than the Go equivalent.

During the lightning talks Timo showed us a very pretty Perl 6 program using his SDL2::Raw to draw an animated square spiral with hypnotic colour cycling type patterns. Also there was a talk by the author about https://bifax.org/bif/— a distributed bug tracking system (which worked offline like git).

Later in the final evening many of us ate and chatted in another restaurant where we witnessed a dog fight being narrowly averted and learnt that Wendy didn’t like Perl 5’s bless for both technical and philosophical reasons.